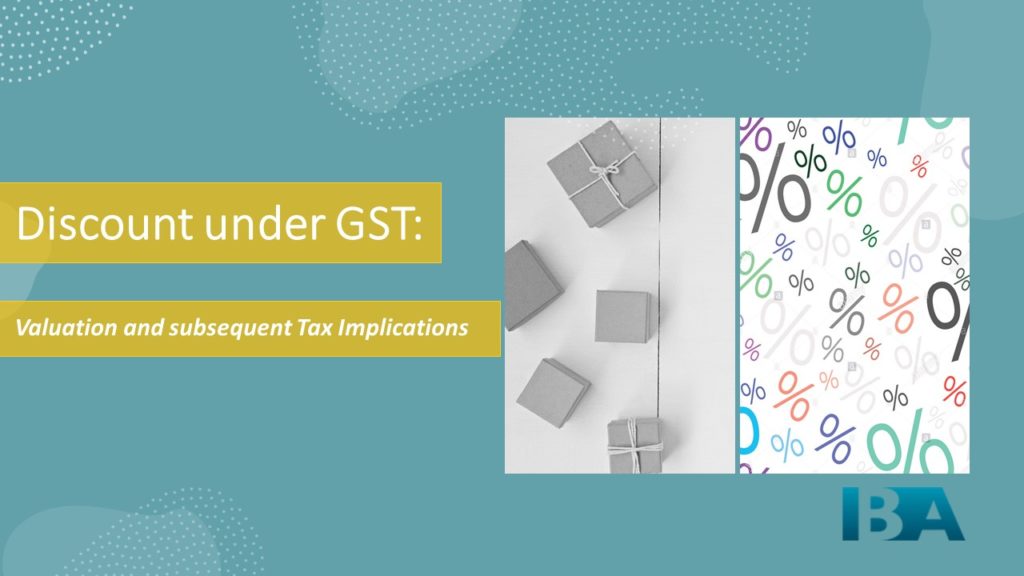 Owing to the current situation in regard to Covid-19 pandemic and subsequent slowdown in economy, suppliers are facing a drastic fall in demand for their goods and services in the retail market. Consequently, many registered suppliers have come up with lockdown offers, various promotional schemes and/or incentives to boost sales volume. Such discounts, as provided to consumers, result in determining the value of supply and consequently the tax implications for both supplier and recipient of goods and services. The same needs to be addressed from Indirect Taxation perspective.

As per Section 15(3) of the Central Goods and Services Tax Act, 2017 (hereinafter referred to as “the Act”), the value of supply shall not include any discount which is given-

Circular No.92/11/2019-GST dated:7th March 2019 also examined discount under GST and provided following clarification on the aspects of taxability, valuation, availability of Input Tax Credit (hereinafter referred to as the “ITC”) in the hand of recipient of the supply :

Hence, such discounts are excluded to determine the value of supply and the proportionate ITC must be reversed by the recipient.

Simply, such discounts are referred to as “volume discounts” which are passed on by the supplier through credit notes.

Such discounts are excluded in order to determine the value of supply, on the prerequisite that they satisfy the parameters laid down in section 15(3) of the said Act, including reversal of ITC by the recipient of the supply proportionate to the discount on the basis of document(s) issued by the supplier.

Such discounts are not known at the time of supply or are offered after the supply is over. For example, M/s ABC ltd. supplies 100 packets of a good to M/s XYZ ltd. at Rs.100/- per packet. Afterwards the former entity re-values it at Rs.90/- per packet and subsequently issues credit note to the later entity for Rs. 10/- per packet.

In such cases, discounts are not known at the time of supply. Hence, the conditions laid down in section 15(3)(b) of the said Act are not satisfied and therefore, secondary discounts shall not be excluded while determining the value of supply

In this instance, supplier can issue a financial/commercial credit note(s) even if the conditions mentioned in section 15(3) of the said Act are not satisfied and recipient need not be required to reverse any ITC.

Additionally,  it has also been ruled out by the advance authority in Advance Ruling No. KAR ADRG 76/2019, Dated 24th September 2019 that when the credit note is issued by a supplier as a post-sale event, as an incentive for purchases over and above the target by their respective dealers or as an incentive for further sale of goods over and above the limit by their respective dealers, the same is not covered under clause (a) of the section 15(3) of the said Act. Further if the recipient of such goods has not reversed ITC proportionate to the discount received in the form of credit note, the same cannot be covered under clause (b) of section 15(3) of the said Act.

Hence, in view of the above, the credit note issued by the supplier does not have any effect on the value of supply and therefore, is only a financial document for account adjustment for the incentive provided.

Henceforth it can be concluded that discount shall be excluded from value of supply if :-

The above scenarios also require reversal of ITC by the recipient of the supply as is attributable to the discount on the basis of document(s) issued by the supplier.

If discount is not known at the time of supply or ITC attributable to such discount has not been reversed by the recipient i.e. if the conditions of section 15(3) of the said Act are not satisfied, discount shall not be excluded from value of supply.