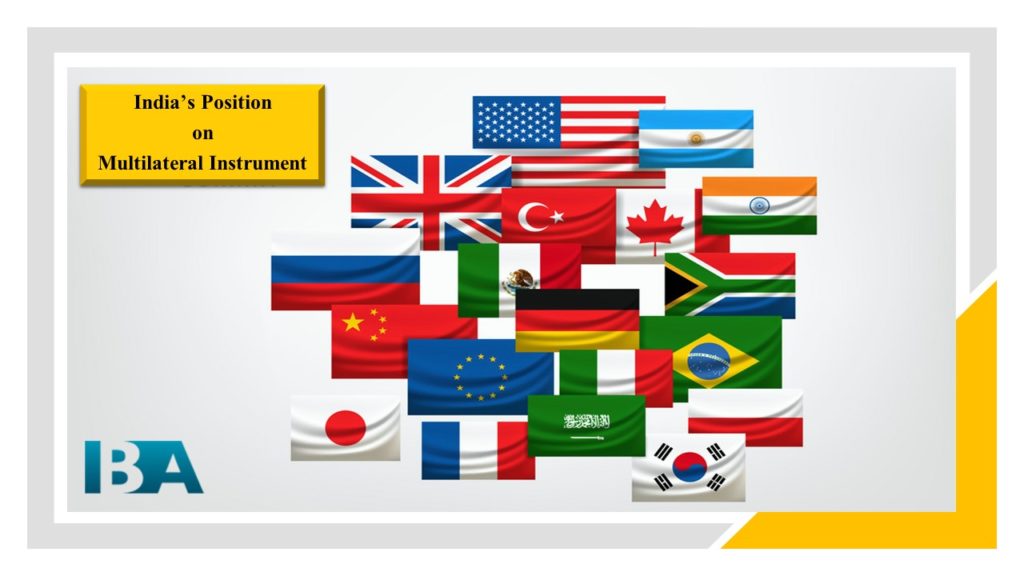 One of the big challenges which the Organisation of Economic and Cooperation Development (“OECD”) face is the shifting of the base of the profit by various global entities. By using the treaty benefits such entities can either save or avoid paying taxes. To mitigate such risk, OECD along with G 20 countries came along in 2013 and set up project named, “ The OECD G20 Base Erosion and Profit shifting (BEPS) Project”. The prime objective of the project was to bring coherence, transparency and substance to the international tax rules and address the issue of tax avoidance.

In July 2013 the OECD released 15 Action Plans on Base Erosion and Profit Shifting (BEPS) to prevent double non -taxation as well as no or low taxation associated with practices that artificially segregate taxable income from the activities that generate it. Since most of the points mentioned in the Action Plan were related to addressing treaty abuse, OECD G-20 came out with a common document know as Multilateral Instrument (“MLI”).

MLI is an instrument to implement agreed changes in synchronised manner across the network of existing agreements without the need to bilaterally renegotiate each agreement. MLI already has significant impact on worldwide network of tax treaties and many countries/jurisdictions have signed/ shown interest or are in the process of signing the MLI. The plan is also to have a synthesised texts developed by each country to facilitate the interpretation and application of tax agreements modified by MLI.

India ratified the MLI on 7th June 2017, represented by the Hon’ble Finance Minister at Paris, alongwith representatives of more than 65 countries.

On 25th June, 2019, India has deposited the Instrument of Ratification to OECD, Paris alongwith its Final Position in terms of Covered Tax Agreements (CTAs), Reservations, Options and Notifications under the MLI, as a result of which MLI will enter into force for India on 01st October, 2019 and its provisions will have effect on India’s DTAAs from FY 2020-21 onwards.

In the subsequent paragraphs, we have discussed the stand taken by India against each article of MLI. For ease of understanding we have bifurcated India’s position into three categories below: Readmore..

This article is also published in Taxguru: https://taxguru.in/income-tax/indias-position-multilateral-instrument.html