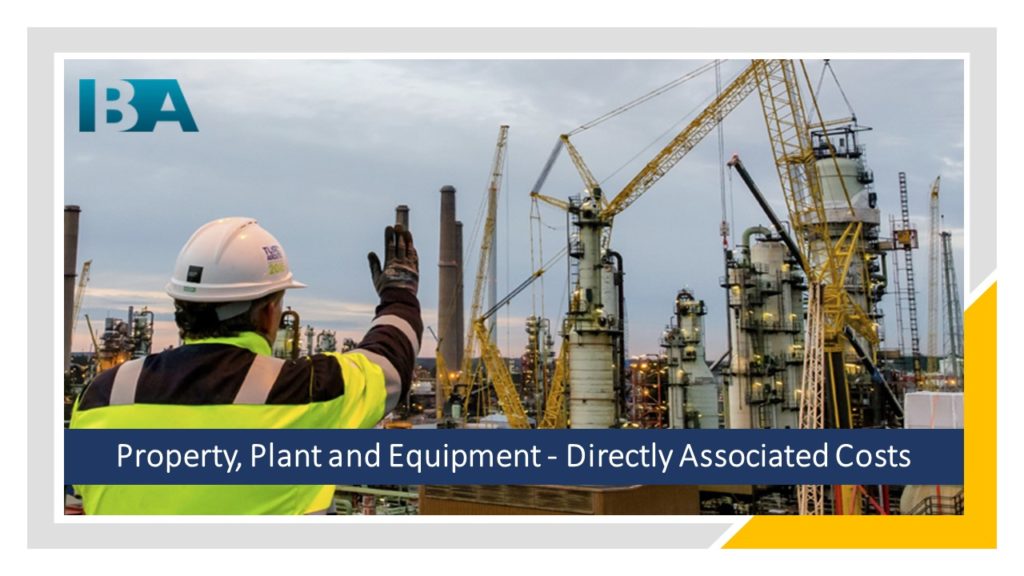 This article aims to :

Discuss the key elements of directly associated costs of PPE.

Measurement of an asset includes all costs directly associated to bringing the asset to the location and condition necessary for it to be capable of operating in the way intended by ownership (its intended use).

The following are the types of directly associated costs :

Directly associated costs need not necessarily be external or additional. For example, cost of employees who are on the payroll of an entity and were fully engaged in installing an item of PPE is a directly associated cost (for the period of installation), and so would be capitalised as part of cost of PPE.

Expenditure necessary in ensuring that the PPE is capable of operating in the way intended by ownership could include a wide range of costs which needs to be assessed for each case based on its facts and circumstances.

Following are circumstances which highlight whether certain expense or income be treated as a directly associated cost :

Start-up and pre-operative costs are not capitalised as part of cost of PPE unless those costs are necessary to bring the asset to its working condition. For example, a company that is opening a new plant in a village where it has not previously operated, may need to obtain licenses that permit it to conduct business in the village. In this example, the cost of the licenses should not be capitalised because they are a general costs that do not relate specifically to the asset. An entity may incur losses before the asset reaches its planned performance level. Such losses are not capitalised.

Income/expenses arising during construction of an item of PPE through associated or incidental operations are also to be assessed for capitalisation. The guiding principle in such cases is to ascertain whether or not such associated or incidental operations are necessary to bring that asset to the location and condition necessary for its intended use. For example, net proceeds on the sale of samples, manufactured during test runs while preparing a production machine for use, should be offset against the cost of the machine. In other words, the cost of these test runs less the associated income, are part of the cost of that machine. On the contrary, if, for example, a company acquired land in a main location with the intention of building its offices on that land, and until the company starts construction and obtains the necessary permits, the land is given on lease. In this case, it could be argued that such associated or incidental operations are not necessary to bring the asset to the location and condition necessary for its intended use and thus the related income and expenses of these incidental operations will be recognised in the statement of profit and loss.

Cost of conducting a viability study with respect to an item of PPE or a group of items of PPE to ascertain if they should be acquired cannot be capitalised even the item(s) are finally procured by the entity. Another example is professional fee paid by an entity to ascertain the cost savings that it could attain by the use of certain machinery.

4. Costs incurred after asset becomes ready to use :

Costs incurred after an item of PPE is in the location and condition necessary for it to be capable of operating in the way intended by ownership, are not included in the cost of that item. For example, after the installation of a new item of PPE or after the construction of a new manufacturing facility, entities often incur cost for training the employees. Such costs, though essential for running the factory/using the item of PPE, cannot be said to be directly associated to the construction/procurement of the PPE. Similarly, when new uses are identified for an existing machinery in the form of new products that can be manufactured by the company with the use of such existing machinery, research cost and training cost for the same cannot be capitalised.

In some cases, government regulations require certain rehabilitation expenditure to be incurred by the company in case of infrastructure projects that significantly impact the location and/or the inhabitants of the area. Such expenditure could be in the form of contributions to certain government funds created for the purpose of rehabilitation/reforestation, construction of schools/hospitals/residential units, expenditures for training in self-employment, etc. Such rehabilitation costs are considered to be directly associated and should be capitalised.

Directly associated costs do not include abnormal amounts of wasted material, labour, or other resources incurred and such costs should be recognised as an expense in the statement of profit and loss as and when they arise.