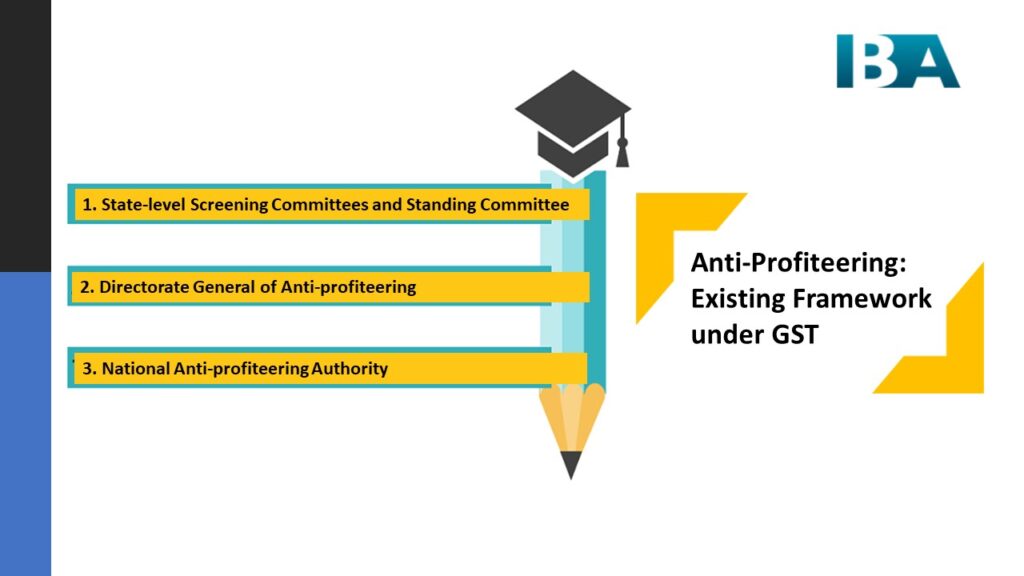 With the introduction of the Goods and Services Tax (GST), the entire landscape of indirect taxation in India has undergone a drastic overhaul. The GST was introduced to remove the cascading effect of taxes, i.e., tax on tax would no longer had to be paid. To do this, a seamless credit system had been formulated wherein any tax paid on inward procurements that are being utilised during the course or furtherance of business would be set-off against the subsequent output tax payable. However, a worry of the government was whether the manufacturers and service providers would pass on the benefit of reduced prices to the final consumers. To curb the practice of enjoying unjust enrichment in terms of profit arising out of implementation of GST in India, the government had put in place an ‘anti-profiteering’ provisions in the GST law through Section 171 of the Central Goods and Services Act, 2017 (herein referred to as “CGST Act”).  This provision has generated great discussion and debate amongst consumers, businesses, and legal commentators.

The term profiteering means the act of making or seeking to make excessive or unfair profits in an illicit manner. Section 171 aims at passing off the benefit due to tax rate changes or enhanced input credit to the final customers by way of commensurate reductions in prices. Through sub-clause (2) of Section 171, the central government has also set up an Authority [called the National Anti-Profiteering Authority (herein referred to as “NAA”)] to monitor and enforce compliance with the requirements of the provision. If NAA, after holding examination, concludes that any registered person has profiteered, then such person shall be liable to pay penalty equivalent to 10% of the amount so profiteered (provided that if such amount is deposited within 30 days of passing of order by NAA, then no such penalty shall be leviable).

Rules 122 to 137 of the CGST Rules 2017 deal with the provisions of NAA. The authority shall be a five-member committee consisting of a Chairman and 4 technical members. The Council may constitute a Standing Committee on Anti-profiteering consisting of such officers of the State Government and Central Government as may be nominated by it. A State level Screening Committee shall also be constituted in each State by the State Governments. The Authority was supposed to be dissolved after the expiry of two years from the date on which the Chairman entered upon his office (i.e., 30th November 2019 as NAA came into being on 30th November 2017). However, the GST Council in its 35th Meeting has decided to extend the tenure by a period of 2 years till 30th November 2021.

There is a 3-tier structure for the investigation & adjudication of the complaints regarding profiteering:

Affected consumers may file an application, in the prescribed format, before the Standing Committee on Anti-profiteering if the profiteering has all-India character or before the State Screening Committees if the profiteering is of local nature. The State Screening Committee/Standing Committee will confirm prima facie evidence of profiteering, and if such evidence exists, then it will refer for detailed investigation to the Director General of Anti-profiteering (DGAP) who in turn will furnish a report of his findings along with relevant records to the NAA for determining profiteering and passing appropriate order. Where the Authority determines that a registered person has not passed on the benefit of the reduction in the rate of tax on the supply of goods or services or the benefit of input tax credit to the recipient by way of commensurate reduction in prices, the Authority may order-

Any order passed by the Authority shall be immediately complied with by the registered person failing which action shall be initiated to recover the amount in accordance with the applicable provisions.

Different high courts in the country have given stay orders on several judgements of the NAA, casting doubts on the legal tenability of the Authority and its operations. The high-profile NAA orders stayed by the courts include those related to Hindustan Unilever (380 crore), Jubilant Food Works (41 crore), Pyramid Infrastructure (8.2 crore), Hardcastle Restaurants (7.49 Crore) & Abbott Healthcare (96 lakh). In many cases, the HCs have questioned the constitutionality of the anti-profiteering section of the GST Act because of lack of a set of rules or methodology to determine what constitutes ‘profiteering’ and how to calculate the amounts garnered by a business through it.

Thus, anti-profiteering is still a work in progress. It had been introduced to protect the interest of consumers and at the same time not harming the industry interest. However, it cannot be denied that these provisions are half baked and require a lot fine tuning, to achieve its objective. In the current format, the government’s anti-profiteering rules raise more questions than answers. The biggest ambiguity being that it is still unclear as to the duration until which the benefit arising out of reduction in GST rates or enhancement in input tax credit pool is to be passed on to the customers.

Therefore, anti-profiteering is likely to be an area where policy and practice will continue to develop Meanwhile, the companies may opt to adopt the methodology which will be in consensus with GST law. Also, it is required for taxpayers to maintain documentation as well as evidence to reflect GST benefits particularly customer agreements and pricing schedules.